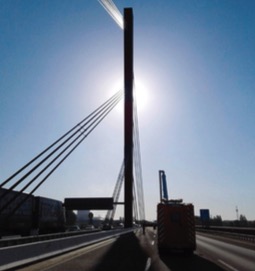 Munich, Bearl. In total, 90 m of expansion joints were replaced at the Baerl Rhine Bridge between 2017 and 2019. The largest one of the four individual joints had a length of 23.15 m and weighed 25 tons. “Its mere size presented a challenge,“ reports civil engineer Holger Redecker, branch manager for MAURER Northern Europe in Dortmund. MAURER was the principal contractor for the expansion joint replacement.

The Rhine bridge forms part of the ‘Emscherschnellweg’ (federal highway 42) and connects the Duisburg districts of Baerl and Beeckerwerth. The total length is 1,030 m, the largest span width across the Rhine 310 m. Two steel pylons, from which stay cables support the bridge deck, bear the main load. The three-lane highway bridge was inaugurated in 1990.

After just under 30 years of service, a thorough reconstruction of the entire bridge was required. The old expansion joints, some of the first MAURER Swivel Joist Expansion Joints ever, had been installed in 1989. In parallel to the joint replacement, work had to be carried out on concrete, road surface and guard- rails – a challenge facing the building site coordination.

The ‘Emscherschnellweg’ is a busy road. On the one hand, this causes the need for reconstruction, on the other hand, it renders reconstruction more complex since traffic must continue running. As the principal contractor, MAURER was also in charge of the 4 + 0 traffic guidance, which means: during the two con- struction phases in 2017 and 2019, the traffic was reduced from three to two traffic lanes per direction and rerouted to one side of the bridge. Thus, the other side of the bridge was completely closed and could be subjected to comprehen- sive reconstruction.

The excavation of the old roadway expansion joints (types DS 845 LVR and DS 520 LVR) was executed by means of highest-pressure water jet cutting. “That was a tough job requiring much effort,” reports Redecker, “since the largest recesses featured a width of 2 m and a depth of 1 m.” Water-jet cutting is more time-con- suming and more costly than classic chiseling; nonetheless, it is increasingly used in reconstruction. One of the reasons: it does not cause relevant vibrations, thus protecting the existing structure.

Over 23-m expansion joint in one piece

MAURER Munich manufactured one swivel joist expansion joint XLS 900 and XLS 600 each for every construction phase. They enable bridge movements of 855 and 570 mm, respectively. ‚Swivel joist‘ means that inclined girders under- neath the expansion joints control the width of the gaps between the lamellae in such a manner that they are almost equal at any time. In this way, bridge movements are evenly distributed to the lamellae gaps.

All four expansion joints with a length of up to 23.15m were delivered in one piece by special transport and lifted into position on site by means of a 100-ton crane. The heaviest XLS 900 weighed 25 t.

The new roadway expansion joints are not just a mere replacement of the old ones but are noise-reduced thanks to integrated rhomboid elements. When traffic crosses, you cannot hear any difference between the asphalt surface and the expansion joint. This comfort for crossing traffic does not only prove advan- tageous for noise prevention and vehicles, but also for the structure itself: the fatigue strength is higher since the impact forces tend towards zero.

Besides technical know-how, jobsite management is getting increasingly more important. “Reconstruction and replacement construction are often more com- plicated than new construction,” knows Redecker. “Space is limited and almost always facts arise on site that no planner could possibly anticipate.” The strain imposed by traffic running nearby and the time pressure to make the road fully passable as quickly as possible add additional difficulties.

The reconstruction on the Baerl Rhine Bridge took three months per direction of traffic: for maintaining road safety, removal, new reinforcement, installation, concreting, asphalting and subsequent works. Now, the bridge is to serve its purpose for another good forty years.