MAURER designs and supplies structural engineering dampers for protection against earthquakes and wind. 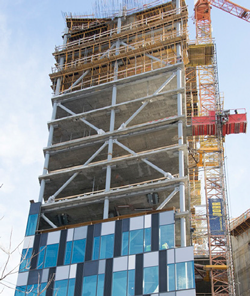 Bucharest. Bucharest is about to get a huge butterfly: two slim office towers, the floor plan of which resembles a butterfly. The wing tips are designed as an elastic steel skeleton and thus are particularly vulnerable to earthquakes and wind. MAURER supplied 56 dampers. These are the first hydraulic dampers in structural engineering delivered by the Munich specialists for building protection.

The “Orhideea Towers” owe their official name to the identically named urban district. It is located west of the center of Bucharest, has an outstanding trans­portation connection with roads, pedestrian bridge and subway and is considered an upcoming business area. The two slim office towers have a buckled floor plan, which – together with the sky bridge connecting them – led to the name “butterfly towers”. The towers feature different heights: the northern one 85 m with 17 stories above ground, the southern one 64 m with 13 stories.

The central structure of the towers is made of concrete. The buildings taper off towards the four wing tips, where the mainly consist of a steel structure. This rather soft and elastic type of construction in combination with the shape (BEHF Architects, Vienna) brings about substantial wind­induced vibrations due to strong vortex shedding at the building edges that interfere with the living comfort. Moreover, Bucharest is situated in a seismic area in which – without damping of the upper stories – building vibrations of more than 500 mm would occur.

Dampers are located in the steel skeleton

The steel skeleton at the wing tips accommodates all movements; however, the development of resonant vibrations must be avoided. The total of 56 dampers is activated by too large or too fast movements of the building. They are located at the end of the diagonal steel braces, two of which spanning across two stories each.

The dampers feature a damping exponent of = 0.15, defining the force out­put of the damper depending on the movement velocity. The control valve in charge of that had to pass a CE test prior to installation to prove the required reaction force. In case of an earthquake, the 32 stronger dampers for the higher office tower respond with 1,550 KN at velocities of 191 mm/s and ±90 mm am­plitude. The 24 smaller dampers at the south tower are designed for 1,170 KN at 191 mm/s and ±75 mm amplitude. Both types of dampers have a length of 750mm. The wind designers have calculated 578KN or 462KN, respectively, for the inferior, but more frequently occurring wind service load case.

These dampers give the building considerably more stability and safety since the movements could be reduced by factor 5 (seismic­induced movements) and by factor 2 (wind­induced movements). In addition, a very slim and cost­effective construction could be realized so that the dampers do not cause additional costs for the total building – in comparison with a considerably more massive type of construction featuring a similar stability.

The construction work for the Orhideea Towers started in October 2015. The dampers were produced, tested an installed in 2017. The completion of the project and the professional installation were carried out in collaboration with the Rettergroup, Mr. Guido Retter. The total rental area of 37,000 m2 has been available since the end of 2018. With this project, the building contractor, the Austrian company CA Immo, aims at being certified according to LEED Gold and thus sets highest standards in terms of design, technical details, and sus­tainability.