Canada: Fixed spherical bearings can move in the longitudinal direction during the construction phase 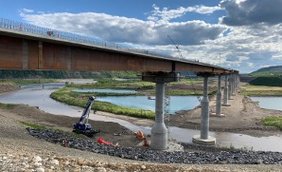 Fort St. John, Canada. Spherical bearings are not very widespread in Canada. However, high superimposed loads, a large temperature difference, and unusual challenges during the construction phase led to MAURER developing modified MSM® spherical bearings for the one-kilometre-long Halfway River Bridge. Special feature is that the fixed bearings had to remain movable in the longitudinal direction of the bridge during installation.

The Halfway River is a tributary of the Peace River in the north-east of the Canadian province of British Columbia. Highway 29 winds partly along the river as busy interstate road from Hudson’s Hope to Fort St. John. About 45 kilometres north of Fort St. John, the highway crosses the river on a 40-metre-long bridge.

Restrain and enable movements at the same time
The new bridge has twelve piers, whereas the challenge lies with the middle six piers with three bearings each. These 18 bearings are fixed bearings that should only allow rotations. The load is transferred via the 50-metre-high piers, in other words: When the bridge moves in the longitudinal direction, for example due to significant temperature fluctuations (ranging from -42 to +40°C on site), the sliding bearings are not displaced, but the piers bend by a few centimetres. The piers were therefore designed relatively slender, with a diameter of only five metres at the bottom. This allows for the necessary elasticity.

Practically, the bridge has several fixed points in the middle. A steel girder runs across each bearing in the longitudinal direction of the bridge, and reinforced concrete slabs lie on top of the three parallel steel girders. The slab concrete is poured into these concrete shutterings.

How can they be fixed?
Now the challenge was: How can the steel girders be connected to the fixed bearings? Since daily temperature fluctuations of 20°C and more are normal on site, the steel girders continually change their length accordingly. When and how are these girders connected to the bearings? Considerations of “bending” the piers accordingly proved impractical. “MAURER was involved in the entire process of detailed planning for the girders,” reports Christian Guckel, P. Eng. PhD, COO of MAURER Canada. Various options were evaluated from a technical and commercial perspective, and the best solution was agreed with the client.

As a solution, MAURER developed an additional sliding surface under the bearings. There are restraining plates for this sliding surface at all sides, but initially only the outer ones were installed to prevent transverse movements. In the longitudinal direction, the girders can move together with the spherical bearing during the construction phase. At the end of the bridge installation, the restraining plates at the front side are also screwed in tight at a pre-calculated temperature of 5°C.

It was also important that the load transmission could be shown in a technically accurate way – and here the spherical bearings came into play.

MSM® virtually without wear
The field of application of MSM® (MAURER Sliding Material) ranges from -50°C to +70°C – a first decisive argument for its use at the location. Compared to conventional sliding material (PTFE), MSM® is also able to withstand at least double the compressions, up to 180 MPa (instead of 90 MPa for classic PTFE). Since the bridge will be located in a reservoir in future, the long service life was also important: MSM® has virtually no wear and therefore will not need to be exchanged as long as the bridge itself is functional.

Installation of large anchoring plates without air pockets
A total of 42 MSM® spherical bearings were installed in November/December 2020. They have a diameter of 520 mm and transmit up to 6,780 kN superimposed load. Since such bearings are virtually unknown in Canada, technicians of MAURER Munich trained the installation team on-site.

The exact positioning of the anchoring plates was critical here, because the additional sliding surface and its fixings made them 1,160 mm long, which was unusual compared to the original planning. The anchoring plates were positioned at first and then cast underneath. “We have shown in preliminary tests with the respective concrete that this method creates practically no cavities under the anchoring plates,” Guckel explains. Any air pockets would cause uneven load distribution.

Construction for the Halfway River Bridge started in March 2020; final acceptance of the bridge bearings took place in May 2021. Completion of the in total 3.7-kilometre-long highway section including the bridge is scheduled for autumn 2022. The client is the Ministry of Transportation and Infrastructure, the contractor is Eiffage-Infracon Halfway River Joint Venture. Fast and competent technical support was important for Eiffage throughout the entire bridge bearing project. “It was our first major project with spherical bearings in Canada, which was also not covered by the standard – making constructive cooperation absolutely essential,” Guckel emphasises.