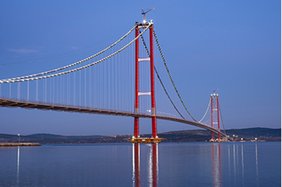 Çanakkale. The world’s longest suspension bridge, with a main span of over two kilometres, was inaugurated in Turkey on 18th March 2022. At the ends of the bridge, MAURER installed innovative MSM® Swivel Joist Expansion Joints allowing movement of 2,800 mm. Due to their special support, they guarantee an accumulated slide path of 50 km.

The bridge over the Çanakkale Strait near Çanakkale (officially named “1915Çanakkale Köprüsü”) has a main span of 2,023 m and a total length of 4,608 m. It is 45 m wide and forms part of the three-lane motorway section from Malkara to Çanakkale. It is intended to relieve the burden on the holiday region and save time. Until now, the Çanakkale Strait has been crossed with ferry.

The expansion joints of the huge bridge and of all approach viaducts were delivered and installed by MAURER in September 2021. The four largest expansion joints on the main bridge accommodate longitudinal bridge movements of up to 2,800 mm and ensure that the bridge can be safely accessed in any state of expansion. Four 16.1-metre-wide XS 2800 were installed in each case.

Regarding design, they are so-called swivel joist expansion joints. Their special feature is that they allow movement in all directions: Displacements transverse, longitudinal and vertical to the direction of traffic as well as any kind of rotations. This is important, because the 1915Çanakkale as a suspension bridge is much less stiff due to its design, while also being located in an earthquake region.

On top of the swivel joists that lend their name to the expansion joint lie the parallel profiles, which are also called intermediate beams. They are at a slight angle to the direction of traffic (except for the joists on the edges) thus ensuring that the opening and closing bridge movements are evenly distributed over the sealing elements between the steel profiles.

Innovative support
The swivel joist expansion joints of the 1915Çanakkale Bridge have been technically optimised regarding several details. The support of the intermediate beams is entirely new: Rather than running in simple elastomeric bearings, the profiles run in w-shaped MSM® bearings. The so-called catamaran support was developed by Maurer in 2020 and is patent pending.

The new support enhances the performance of the entire expansion joint. Due to MSM® and the special bearing shape, the profiles slide more easily and precisely over the joists. This prevents restraints and increases service life.

High forces in the guide bars
Very high forces act in expansion joints. The 1915Çanakkale Bridge, for example, was designed for heavy traffic. However, the challenge is not the vertical, but rather the horizontal forces acting on the lateral guide bars of the sliding bearing. These bars ensure that the intermediate beams remain “on track”, in other words: exactly parallel at all times (transversely to the direction of traffic) and with equal distances between them. Given that the bridge can move by one metre within seconds, extremely high compressions develop in the relatively small guide bars. These forces not only result from the control force of the expansion joint, but also from braking or acceleration forces of vehicles.

In extreme cases, the guide “gets jammed” – which can be compared with a simple drawer that is tilted when pulled open. Such restraints lead to wear in the guide bearing.

MSM® guarantees 50 km accumulated sliding displacement
MSM® (MAURER Sliding Material) with grease pockets is a high-performance sliding material that MAURER has been using in bridge bearings for 20 years. It accommodates much higher compressions than the composite material used in swivel joist expansion joints and is approved for an accumulated sliding displacement of at least 50 km. However: The advantages of MSM® can only be harnessed, if the sliding surfaces are in constant contact with each other. But this has not been the case with the swivel joists so far, since the sliding elements were sometimes in contact with the left and sometimes with the right side of the lateral guides. This resulted in a so-called gaping joint.

Therefore, MAURER developed a new bearing in w-shape, technical term “prism guide”. The decisive difference can be imagined by visualising a catamaran: Like on two “skids”, the profiles lightly and precisely slide over the joists in a tilt-proof way, thus resulting in a very stable guide.

Significant noise reduction
All expansion joints of 1915Çanakkale Bridge including the approach viaducts, are equipped with noise protection in the form of welded rhomboid plates. Welded rhomboid plates significantly reduce noise by up to 60% and increase riding comfort at the same time. It is essential that MAURER avoids bolted solutions in the dynamic area, such as in traffic: The bolts may loosen under the dynamic load and no longer be tightened. The applied welded connection, on the other hand, is long-lasting and guarantees a durable connection

Start of construction of the 1915Çanakkale Bridge was in 2017, MAURER installed the MSM® Swivel Joist Expansion Joints within only five weeks in 2021. In addition to the four large expansion joints, each weighing around 65 tonnes, MAURER also delivered the expansion joints for all approach viaducts. They are all designed to withstand earthquakes.